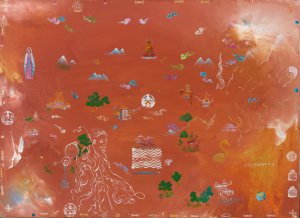 Image courtesy of the artists

☆ Add to wishlist
Karma Phuntsok was born in 1952 in Lhasa, Tibet. After fleeing as a child with his family following the 1959 Tibetan uprising, Phuntsok studied thanka painting with a Tibetan master based in Nepal. Phuntsok continues to work in the thanka style, a highly detailed style of Buddhist painting onto textiles, that contains religious imagery and depictions of tales from Buddhist theology.

In 1981, Phuntsok moved to Australia and settled in the Northern Rivers region, where he currently lives and works. Phuntsok and Tim Johnson have been regular collaborators, including – alongside Brendan Smith – the monumental nine-panelled Lotus born, 2006, in the Art Gallery of New South Wales collection.

Tim Johnson is a painter who has explored the symbols of world religions and cultures for close to five decades. His works frequently reference and mix Buddhist, Indigenous Australian and pop culture icons, exploring the ways in which archetypal figures, stories and images are able to cross cultural boundaries. Artistic collaboration has always been intrinsic to his practice, with other collaborators aside from Karma Phuntsok including My Le Thi and Clifford Possum Tjapaltjarri. In 2009-10, a major solo exhibition, Tim Johnson: Painting Ideas toured the Gallery of Modern Art, Brisbane, the Art Gallery of New South Wales, Sydney, and the Ian Potter Museum of Art, Melbourne. He showed in 2012 at The Unseen, the Fourth Guangzhou Triennial, China, and has been included in three Biennales of Sydney.