Provenance
Tolarno Galleries, Melbourne
Acquired from the above in 2005

Reprinted by Bill Henson in 2017 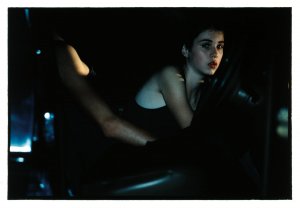 ☆ Add to wishlist
'Henson’s work is a celebration of the amoral. He makes no judgements, takes no positions, addresses no issues and yet reveals all manner of human instincts, intuitions and imaginings. His work and its inviting intrigue compel us to contemplate the imponderable and to wonder at the impenetrable. As such they are revelations of the imagination made seductively tangible but never fully complete or comprehensible.' (Edmund Capon on Bill Henson, 2004)

Bill Henson is one of Australia’s leading photographers. He has exhibited for over forty years in Australia and internationally, with his first major show coming at the age of just nineteen at the National Gallery of Victoria, Melbourne. Whether working with figures, landscapes or architecture, Henson’s theatricality, masterful handling of light and willingness to experiment with printing processes yield rich, painterly surfaces that have left an indelible mark on the history of photography.

Writings on Henson abound with literary comparisons from Marcel Proust to W.G. Sebald, the common denominator being the belief that the body is an artistic medium. Whether candidly capturing the lives of ordinary people in Melbourne’s CBD as a photographic embodiment of Baudelaire’s flâneur or in his staged and highly theatrical tableaux vivant images exploring youth and sexuality, Henson is unrelenting in his quest to document the totality of human experience from the depths of boredom to the peaks of ecstasy.

In 1995, Henson represented Australia at the 46th Venice Biennale with his unique and highly celebrated ‘cut-screen’ photographic works. In 2005, the Art Gallery of New South Wales, Sydney, staged a survey of Henson’s work that travelled to the National Gallery of Victoria in 2006 to unprecedented crowds. In 2006, too, he staged his second major international solo exhibition, Twilight, held at the Victoria and Albert Museum, London. In recent years, the Art Gallery of New South Wales held a show dedicated to his Cloud Landscapes, and in 2017 he showed at the National Gallery Victoria as part of their Festival of Photography. His work is the subject of two extensive monographs: Lux et Nox, 2002, and Mnemosyne, 2005, both published by Scalo, Switzerland.