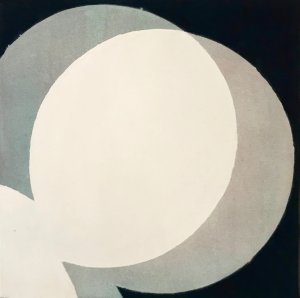 ☆ Add to wishlist
Peter Atkins is an obsessive collector who takes stock of his observations from life and turns them into clever abstractions. Often referencing popular or consumer culture, Atkins has spoken of his work as an act of “reclaiming” visual value from mass production. As he has said of his own work in a 2012 interview with New Zealand artist Jake Walker, “the connection back to the found object has been paramount”, a connection reinforced by often exhibiting the source material alongside the artwork that it inspired.

Born in Murrurundi, New South Wales in 1963, Atkins studied at the Newcastle Art School and the National Art School, East Sydney in the mid 1980s. Inspired by Australian abstract artists like Ian Fairweather, Grace Crowley, Tony Tuckson and Ralph Balson, Atkins forged a path partway between abstraction, pop art and readymade sculpture. Atkins compulsively researches the visual history of the objects he uses, from early Victorian Railways tickets through to family crests and patterns from Japan in the Edo period (1603-1868). This iconography, analysed and repurposed, draw attention to the history of the symbols and forms that surround us on a daily basis and amplify these design elements to the place of fine art.

Atkins has exhibited in Australia and overseas since 1987 and his work is found across Australian public, private and corporate collections. In 2003, the Lake Macquarie City Art Gallery and Latrobe Regional Gallery presented a major survey of Atkins' work, Big Paintings 1990-2003, and in 1994 Atkins was awarded the Gold Medal at the VIII Triennale - India 1994 for his exhibition World Journal, curated by Annette Larkin.