“An important bridging drawing between two different though related concepts. It is basically an environmental construction drawing with some characteristics of a symbolic-journey drawing. The intricate structural elements are spread in an open organization across a plain at the foot of a cliff. Lines are placed perspectively in order to carry the eye onward into the maze of shapes and it is possible that the notion of a vicarious journey through such a construction was the seed from which the symbolic-journey drawings developed.” (James Gleeson, Robert Klippel, Bay Books, Sydney, 1983, p.160) 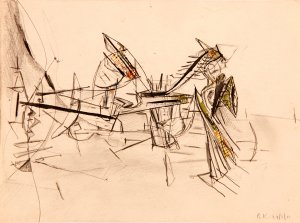