“A sheet of nine ideas for constructions. All are vertical in character though varied in form. Most of them have been developed beyond the ‘impressionistic’ state and the details are often quite precise.” (James Gleeson, Robert Klippel, Bay Books, Sydney, 1983, p.171) 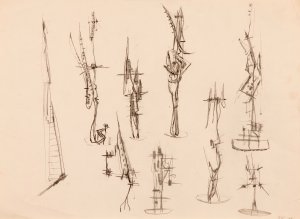