“Two constructions fashioned from coloured paper cut-outs from magazine illustrations. It should be noted that in all Klippel’s collages where he has used magazine material the shapes are cut out in a way that contradicts the original imagery and are used as purely abstract constructional elements. In his metal constructions of the 1960s he used junk fragments in the same way. It is never pertinent to his conception that we should be able to recognize the source of the component parts.” (James Gleeson, Robert Klippel, Bay Books, Sydney, 1983, p.199) 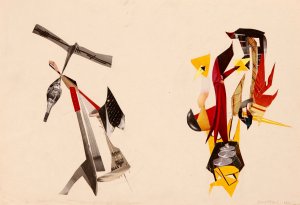