Provenance
Roslyn Oxley9 Gallery, Sydney
Acquired from the above in September 2006

One of the edition is in the collection of the Art Gallery of South Australia, Adelaide

With a scientific eye to research and detail, Fiona Hall blends art forms and traditions to ask questions about the relationship between nature and culture. For over three decades she has transfixed and surprised audiences with sculptures, installations and series that reference natural and colonial history, scientific discovery and classification, taxidermy, botany and empire. With a strong sense of wit and play, Hall creates instructive and provocative artworks that ask the viewer to look again both at the natural world and at the artist’s craft.

Mire (2005) is one of only two rug works by the artist.  It draws together the many lines of thought and practice that govern Hall’s practice. The wool artwork depicts a number of swamp plants native to Afghanistan with Dari names written underneath. This mirrors Hall’s practice of depicting Australian native species in the Burning Bright series with both their Indigenous Australian and Latin botanical names, reflecting the different cultural and scientific perspectives on the same plants. The botanical specimens sit atop a repeated pattern that resembles military camouflage, but the shape itself derives from a heat map of Afghanistan. Completed four years into the Afghanistan War and depicting species from an environment sensitive to climate change, Hall’s work draws attention to two highly sensitive political issues – both of which are as relevant today as they were in 2005. The work can be laid on the floor or hung on a wall.

Born in Sydney and currently based in Hobart, Hall studied painting and photography, for which she was initially known in the 1980s. By 1989, she began producing major installations and from the late 1990s produced series of prints and editioned, painted banknotes featuring botanical sketches of plants central to imperial economies. Her work pays homage to world culture from Japanese Zen Buddhism to Indigenous Australian botany. But there is a particular sensitivity to places of conflict and disaster such as Guyana and Sri Lanka, the latter which she describes as a “paradise” that has been torn apart by colonialism and civil war. The theme of colonialism in particular underscores much of Hall’s work, reflecting on the economic exploitation of native peoples and products like in her When my boat comes in series (2002). 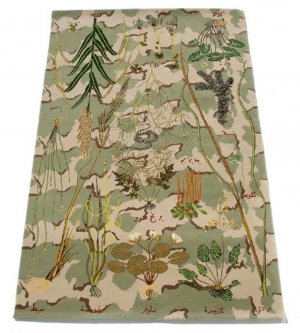 ☆ Add to wishlist
With intricate precision and a poetic sensitivity, Fiona Hall crafts sculptural and two-dimensional forms that question our relationship with nature and society. Her combination of fine craft and sharp intellectualism create layered and fascinating narratives with a visual lyricism and real tactility. The span of her career over three decades has enchanted viewers with a combination of new and found materials with extensive research and reference to history: the museum; scientific discovery; Darwin; Victorian classification; taxidermy; botany; voyages of discovery; colonisation; antiquarian books and drawings. Fiona Hall takes these patterns and signifiers of a past world and transforms them into a contemporary language of incisive wit and playfulness.

Born in Sydney and currently based in Adelaide, Fiona Hall studied painting at the National Art School from 1972 to 1975 and photography at New York’s Visual Studies Workshop from 1979 to 1982. Known initially for her photography, by 1989, Hall was celebrated for her installation work such as Paradisus Terrestris entitled (1996).