In 1974, James Mollison Director of the Australian National Gallery in Canberra, approached Robert Klippel “to make a large-scale work, fifteen or twenty metres high, to stand in the Sculpture Garden of the gallery. It was envisaged that part of the construction would stand in a pool, or indeed, several pools, while the rest should rise as though growing out of the landscape...

He began actual work on the scheme in 1974 and produced a series of four maquettes No. 301, 302, 305 and 306  – while exploring a range of possibilities; and while No 304 is not officially classed as a related maquette, it was undoubtedly the outcome of the same thinking that had inspired the neighbouring works.

In the end, the project didn’t eventuate due to Klippel’s hesitation on its success and his long-term engineer in making larger works, Les Wild, had retired due to ill health.  ‘Klippel could not face the prospect of tackling the biggest project of his life with an unknown and untried stranger. In the end he had to advise the National Gallery’s director, James Mollison that he felt unable to continue with the commission and the four remarkable maquettes came into the National Collection in lieu of the one big work that never eventuated…. For Klippel ‘Near enough was never good enough; it had to be exactly right or it was totally wrong.”

It was later in 1982, that Klippel fulfilled Mollison’s dream of the 8 bronze works now commonly known as 'Gallery 8’ that now sit in the a pool of water in the Sculpture Garden in Canberra.

These five works – 301, 302, 304, 305 & 306 were all wonderful low, horizontal works that if made larger would have towered up and spread out to command a landscape. No. 304 was definitely the most complex with its’ ‘lightness, refinement of invention and elegance expressed in geometric forms.’  (quotes are all from James Gleeson, Robert Klippel, Bay Books, Sydney, 1983 pp. 359-361) 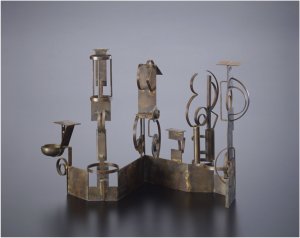