Provenance
Martin Browne Fine Art, Sydney
Acquired from the above in 2002 (purchased just before exhibition in 2002 so work was not exhibited in New Paintings 2002)


In 2002, Aida Tomescu held an exhibition called New Paintings at Martin Browne Fine Art, Sydney. The works in that exhibition marked a change of direction for Tomescu, away from the monochrome, gestural works of the 1990s, and towards new explorations of colour and space.

In a later catalogue, the critic Terence Maloon wrote of this body of work that:  “the churned-up, grungy textures, the lashings of dribbles and the peripheral fizz of spatters that had come to characterise Tomescu’s style suddenly disappeared. There was a group of paintings whose colour was clear and radiant – seraphic yellows, pale blues and silver greys, with the surfaces all smoothed-out and becalmed. Whether these paintings were large or small, they made me think of vast sea-surfaces and a brilliant light which, to my mind, evoked the Aegean. The mood was serene and beatific.” (Terence Maloon, Aida Tomescu, Niagara Galleries, Melbourne, 2006, exh. cat. p. 7.)

Albastra translates to 'The Blue one'.

Tomescu’s paintings like Albastra are archaeological digs, palimpsests created through a process of building up layers of paint before scratching into the surface, an excavation of what lies beneath. Tomescu’s ground of orange, yellow, umber and turquoise is built up, layer upon layer, but showing through only in moments where the surface layers have been carved back. The surface of the work modulates across passages of cornflower, celadon, gray-blue and white, guiding the eye across the span of the painting as if looking upon the sea or a field of flowers. The overall effect is one of immersion and movement, with a subtle horizon line guiding the viewer up and down the work. 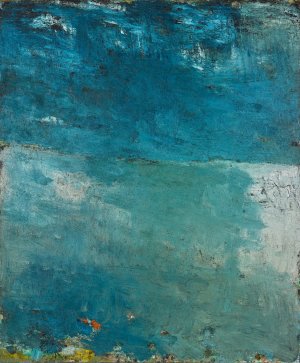 Image courtesy of the artist and Fox Jensen Gallery, Sydney/Auckland

☆ Add to wishlist
Born in Bucharest, Romania in 1955, Tomescu came to Sydney in 1980, where she began to exhibit with Gallery A and Coventry Gallery and, where she continues to live and work. Tomescu trained at the Institute of Fine Arts, Bucharest to 1977 and the City Art Institute, Sydney to 1983.

Tomescu was awarded the Dobell Prize for drawing in 2003, the Wynne Prize for landscape painting in 2001 and the Sulman Prize for genre or subject painting in 1996 by the Art Gallery of NSW, Sydney. In 1996 Tomescu was also awarded the inaugural Lowenstein Sharp fellowship at Heide Museum of Modern Art, Melbourne, which was followed by a solo exhibition of the artist's work at the institution in 1997. In 2009 the Drill Hall Gallery, Australian National University, Canberra presented the solo exhibition 'Paintings and Drawings'.