James Gleeson writes about Robert Klippel's early drawings when he was living in London in 1948: "From the beginning, drawing was a passion and a necessity to Klippel. He had to draw to release the intense pressure in his creative imagination, in order to give substance to his ideas, to feel his way towards a particular sculptural concept; and later on he drew because it was an activity he enjoyed for its own sake and because it could express another aspect of his artistic personality....

Of course they all arose out of his thinking about sculpture, for they are the drawings of a sculptor, with sculpture forever on his mind. The fact that they could all be realised as three-dimensional forms is an inevitable result of his habits of thinking, but they are not necessarily conceived as working plans for a projected piece of sculpture. By this time, Klippel had realised that his imagination was so quick with ideas that he could never hope to fashion them all into three-dimensional reality. Hence he seized upon drawing as a way of catching and holding the ideas as a two-dimensional projection." (James Gleeson, Robert Klippel, Bay Books, Sydney, 1983, p. 63) 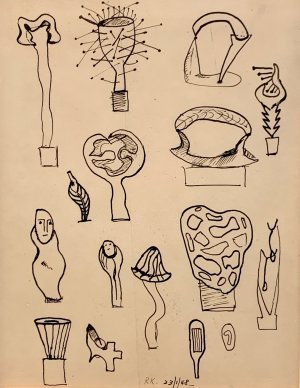