Provenance
The artist
A gift from the above


Lashings of thick impasto bring into focus the image of a skull hovering before a lilac background. As viewers, we are immediately drawn into an exercise in perspective. Zooming in and out, the eye is drawn inwards to Quilty’s vivacious use of colour and movement and out to the form of the skull itself. Bringing the work’s materiality to the fore, there is undoubtedly a kind of visual pleasure associated with observing a work that clearly reveals the hand and movements of the artist. This work is an unmistakable example of Quilty’s now iconic stylization that straddles the figurative and the abstract. More than simply eliciting a pleasurable aesthetic experience, this visual technique serves an explicit artistic and often political purpose.

As Quilty explains:  “Most of my work investigates the relationship between a luscious surface and the darker and more confronting nature of the overall image. I enjoy the theatrics of forcing the viewer to move back from the enticing surface to see the more figurative imagery hidden in the paint.’[i]

Completed in 2005, the skull represented in this work originates from a moment in Quilty’s career as he transitioned away from his earlier depictions of his beloved Toranas, into a more portrait centric visual practice. Skulls are after all, the invisible sub-structure of all portraits. Quilty’s use of negative space often leaves a stencil-like cut out of a skull embedded in the portrait, blurring the recognizable face of the sitter and their skeletal anatomy underneath. Used for centuries as a potent Art Historical symbol, the skull has always been a harbinger for death, an ominous warning sign for what lays ahead. In this way, it allows Quilty to investigate the ambient nature of human mortality. It is also a reminder of what can lie beneath a surface, revealing sometimes-disturbing truths. The skull has become a symbol that resonates across Quilty’s oeuvre, from his earlier explorations into the self-destructive tendencies of Australian masculinity and youthful recklessness, to his portraits of Australian soldiers in Afghanistan as the Official Australian War Artist in 2011. 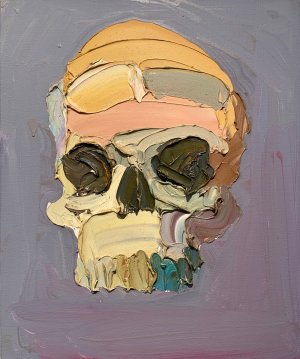 Image courtesy of the artist and Tolarno Galleries, Melbourne

☆ Add to wishlist
Famously inspired by Arthur Streeton's nationalistic directive that an artist should choose a subject that is local and familiar to them, in 2002 Ben Quilty produced a sell-out show of bold paintings depicting the beloved Torana that sat in his yard. Since then, Quilty's emphatically expressive work has continued to command attention, and the acclaimed artist frequently exhibits in national and international exhibitions and art fairs. His work is held by the Art Gallery of New South Wales, Museum of Contemporary Art and numerous corporate and private collections. He won the prestigious Doug Moran Portrait Prize in 2009, and was a multiple finalist in the Wynne and Archibald Prize, before winning the Archibald in 2011 with his tender portrait of Margaret Olley. In October 2011 Quilty travelled to Afghanistan as an official war artist.

Quilty grew up in the outer suburbs of Sydney and his history as a hard-drinking, hard-living youth is an important part of the artist's mythology. He says "I'm trying to use that weird dark behaviour for something a bit more positive." However equally significant to the artist's biography is the double-degree in fine arts and design that he received from the Sydney College of the Arts and the University of Sydney, as well as further study he undertook in 1996 in Aboriginal History at Melbourne's Monash University. Nick Mitzevich, the director of the Art Gallery of South Australia, has said: "Quilty is not a painter who sits on his laurels and accepts his success. He is constantly reinvigorating both his subjects and his techniques." Ben Quilty now lives in Robertson in the NSW Southern Highlands, and his large studio sits in the shadow of the Big Potato. Ben Quilty is represented by Tolarno Galleries, Melbourne, Jan Murphy Gallery, Brisbane and Pearl Lam Galleries, Shanghai, Hong Kong and Singapore.