Provenance
Roslyn Oxley9 Gallery, Sydney
Acquired from the above by the present owner in 2013


"Del Kathryn Barton draws every day, and has done for many years. It is the core discipline in her work, the one constant that holds all other disparate energies and directions together, to which she regularly returns.  Asked about her practice, she immediately speaks about drawing as the focus, with paintings being made more intermittently, and she always includes drawings in every exhibition: ..'a show wouldn't be complete without at least one drawing'. From her first artistic practice, as a child, drawing has continued to be a daily source of energy, ideas and references." (Julie Ewington. 'Drawing, Dreaming', Del Kathryn Barton, Piper Press, Sydney, 2014, p.131)

In 2009, Barton used the image of the scissors for the first time in a suite of 21 drawings which were exhibited the following year in Freehand: Contemporary Australian Drawing at Heide Museum of Modern Art, Melbourne. As Ewington notes about Barton's depiction of scissors, which "she sees as a direct reference to the work of Louise Bourgeois.... Barton is clear the Bourgeois's imagery and example were now explicitly influencing her drawings; though unsure if she had seen the tool depicted in Bourgeois's own work, she remarked that for her '...scissors and thread are associated with Bourgeois." (Julie Ewington. 'Drawing, Dreaming', Del Kathryn Barton, Piper Press, Sydney, 2014, p.157) 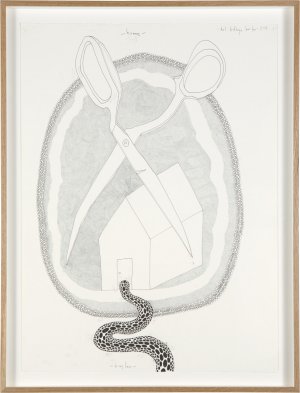 ☆ Add to wishlist
One of Australia’s most popular contemporary artists, Del Kathryn Barton is best known for her distinctive style of painting with linear, exaggerated figures and a psychedelic palette. Born in Sydney in 1972, Barton began exhibiting in 1991 and developed a reputation as a skilled draughtswoman with a particular knack for both human and animal portraiture. She has since expanded her practice to installations, textiles, printmaking and short films, across which she has explored sexuality, motherhood, and nature.

As Dr Nicola Teffer wrote on Barton ahead of Know My Name, National Gallery of Australia, Canberra (2020-21): “Barton’s experience of motherhood had a profound impact on her art. The fecund energy of pregnancy and intense emotions of maternity fed into personal and autobiographical imagery that for Barton was a way of understanding her own feelings about love, relationships and the connection with others.”

Barton has twice won the Archibald Prize, Art Gallery of New South Wales, Sydney: first, with a self-portrait reflecting on motherhood, You are what is most beautiful about me, a self-portrait with Kell and Arella (2008); and, second, with a portrait of actor Hugo Weaving, hugo (2013).

In 2012, Barton held a major solo exhibition inspired by an Oscar Wilde story, The Nightingale and the Rose, Heide Museum of Modern Art, Melbourne, which was restaged and toured across Australia (2012-19). Off the back of this exhibition, she produced into an acclaimed 2015 short film which was released at major film festivals around the world. In 2017, Barton received a major survey, The highway is a disco, National Gallery of Victoria, Melbourne, that reflected upon the themes of motherhood, womanhood and death in a collection of paintings and installations.