Robert Klippel exhibited with Watters Gallery for well over two decades. Watters Gallery director Geoffrey Legge noted in the 1994 exhibition catalogue when this work was first shown, that many of Klippel’s works use different sources, including coloured, glossy magazine paper, photocopies of these pages, or hand-painted paper “using, in the main, bold flat acrylic colours”. As Legge notes, there is a certain minimalism in Klippel’s collage works, as if these works were “about achieving more powerful images with fewer means”. This is true of his materials – much of which would have been recycled or otherwise discarded – as well as the subject matter, with a visual language of bright colours and loosely geometric forms to create the final composition. 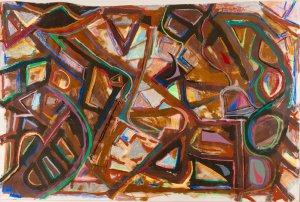