This was one of 67 paintings that Plate exhibited at David Jones Art Gallery, Sydney, in 1958. A glowing review of these works at the time read: “…one of the most impressive one man exhibitions of paintings in years at DJ’s Gallery. The quantity of the work is in itself overwhelming, sixty-seven paintings (done during the last two years…but it is the quality of the canvases that has the main impact for Plate now stands among Australia’s best painters…the range is immense, but – one sees the man, his passion – and the compensating artist’s sensitivity and tenderness. There is a sureness of judgment, the harmonies edged with acidity. Vibrating planes move in space, interlock, separate and united again.” (‘Impressive Exhibition by Carl Plate’, Sydney Morning Herald, 17 September 1958) 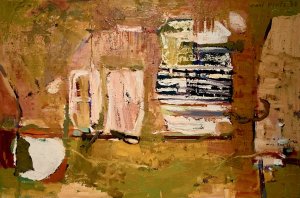