Provenance
Hilda Mangan, the artist’s sister
Niagara Galleries, Melbourne
Acquired from the above by Jocelyn Plate on 5 April 2000
The Estate of Jocelyn Plate


“Influenced by Hokusai, this work was one of a large suite
which made up an extra exhibition in addition to the artist’s usual yearly one.
This painting was one of Hilda Mangan’s favourite works, and according to her was exhibited in March 1932 at the Meldrum Gallery, which had been recently opened by Beckett’s friend, Jim Minogue. Several others from this suite are in the [National Gallery of Australia, Canberra], including a closely related
image (Seascape)…” ( 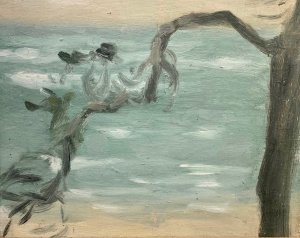 ☆ Add to wishlist
Clarice Beckett, against all odds, is now recognised as one of Australia’s major modernist painters. Maligned by the art establishment during her life, she was close to anonymous until the 1970s, when a resurgent interest in her works finally brought the recognition she deserved.

Born in rural Victoria in 1887, Beckett took charcoal drawing lessons as a child before enrolling in the National Gallery School in Melbourne under Frederick McCubbin. She was an early leaver of the school before the defection of Arnold Shore, Colin Colahan and others, all of whom went to learn under the tutelage of the controversial Australian Tonalist artist Max Meldrum. While Meldrum once famously deemed that “There would never be a great woman artist and there never had been”, he came to see Beckett as his star pupil. “She worked like a man”, he said in a patronising compromise. (Quoted in Rosalind Hollinrake, Clarice Beckett: Politically Incorrect, The Ian Potter Museum of Art, University of Melbourne, 1999, p. 15.)

Tonalism – with its hazy edges, pastel palette and minimal subjects – flew in the face of the predominant Heidelberg School vision of bold colours in narrative paintings. Beckett’s distinctive “blur” gave an atmosphere to all her landscapes and still lifes, recalling Whistler’s belief that paint should be “like breath on the surface of a pane of glass”. (Tracey Lock, The present moment: The art of Clarice Beckett, Art Gallery of South Australia, 2021, pp. 102-104.)

In 1924, Beckett provided a simple artist statement to explain her artistic objectives: “To give a sincere and truthful representation of a portion of the beauty of Nature, and to show the charm of light and shade, which I try and set forth in correct tones so as to give nearly as possible an exact illusion of reality." (Clarice Beckett, 20 Melbourne painters, 6th Annual Exhibition Catalogue, 1924.)

It was while painting one of her many seascapes that she caught pneumonia in 1935 and died, aged just 48. A shed containing nearly 2000 of her paintings was left abandoned, exposed to the elements. By the time they were found over thirty years later, over 1000 of them had been irreparably damaged.

Her resurgence in the art world began in the 1970s upon the discovery of this large cache of works and a 1971 exhibition curated by Rosalind Hollinrake in Melbourne. Since then, she has received a number of major exhibitions, including Clarice Beckett: Politically Incorrect, Ian Potter Museum of Art, University of Melbourne, Melbourne (1999); and most recently Clarice Beckett: The present moment, Art Gallery of South Australia, Adelaide (2021). Her work is now held in all major public collections in Australia.