Drawing (also known as Untitled or Gestural Landscape or Night Sky), 1976
oil paint and crayon on paper
45.5 x 35 cm (image); 65.2 cm x 53.5 cm (frame)
with eight labels, including three from the Biennale di Venezia '82, one from the Arts Council of Great Britain and one with the Laverty Collection number 'ID.33' (all on the reverse, full details below)


From 1977, Booth introduced the figurative and the representational into his work, inspired by William Blake, the psychology of the unconscious, and the manifestations of the unconscious in the works of the Surrealists and Magic Realists in art and literature. He began  recording a diary of his dreams and a process of automatic drawing. Drawing, 1976, can be seen as a transitional work towards this move to representation, a bleak, industrial landscape that still refers to the world of abstract signs. 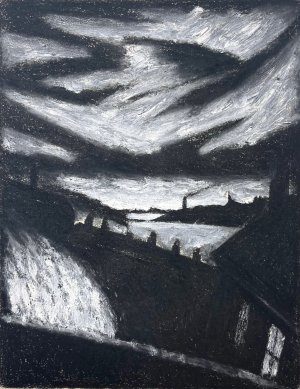