Booth’s figurative and landscape works refer in equal measure to the apocalyptic, the symbolic and the surreal. Each image has underlying references to mythor fable – the serpent and red fruit, for example, in Drawing (Snake), 1994. But the works remain hauntingly present in the real world, a comment on the fragility of the planet and the unsteady relationship between humanity and destruction. 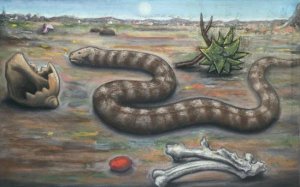