Provenance
Yuill Crowley Gallery, Sydney
The Laverty Collection, acquired from the above in August 1988 (Laverty ID28)


Beginning his career in abstraction, Booth exhibited his hard-edged ‘block’ paintings at the National Gallery of Victoria’s inaugural exhibition at St Kilda Rd, The Field (1968). In the early 1970s, he began to create his ‘doorway’ paintings, which confined the colour field to the centre of the image within an enclosing border. Drawing (For Angelika), 1972, is an example from this time, notable for its purple and yellow colour at a time when Booth was mainly known as a painter of black. 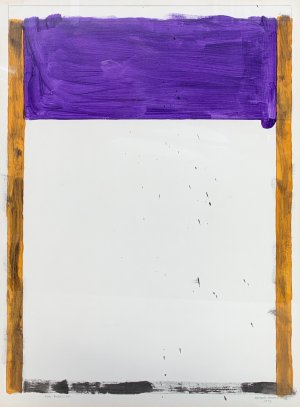