Provenance
Ray Hughes Gallery, Brisbane
Ian Still, Brisbane 1977-1987
Clinton Tweedie, Melbourne 1987-1991
Acquired from the above by the present owner in 1991


Rosalie Gascoigne has a place in the pantheon of Australian art stars, and has left a legacy of work that is not only informed by the visual language of this country but has, in turn, strongly influenced its vernacular as well. Blue Water (1977) is an intimate, intricate assemblage from a period of Rosalie Gascoigne's early practice focused on the use of wooden boxes to create small dioramas. The work is composed entirely of materials found scavenging in the Canberra Hinterland, Gascoigne's home for more than fifty years. In what has been called the artist's "poetry of the commonplace", she used everyday materials from the Australian landscape to evoke a sense of place, its people, and the passage of time.

'Blue Water' has Gascoigne's signature rustic aesthetic and palette of the land, and yet is unique in that it also speaks of the off-shore and colonial history of Australia. She assembles this story against a backdrop of Sydney Harbour cut from the Toohey's Bitter Ale tin with an inspired selection of objects including maritime flags cut also from the beer tin, an ensemble of waving dolls arms, a fire extinguisher label and a Capstan Navy cut cigarette box. Like a time capsule, it is a work that evokes a history of a particular time and place, lovingly compiled from objects with histories of their own. 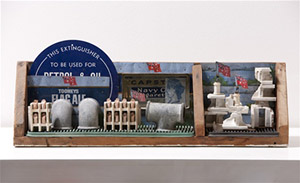 Courtesy of the artist's estate and Roslyn Oxley9 Gallery, Sydney

☆ Add to wishlist
A relative latecomer to the art world, Rosalie Gascoigne made an incredible contribution to Australian landscape. It was only after practicing ikebana, the Japanese art of flower arranging, from 1962 that Gascoigne began to turn seriously towards the visual arts. Beginning with iron assemblages from 1964, in the 1970s she made works from animal bones and found objects from Australian country houses. Her aim there and across her career was to depict the land using materials found upon it, a cycle of reuse that mirrors the diversity of relationships that Australians have with the landscape.

In her late work, Gascoigne moved away from the pure display of found objects into more rigorous compositions. From the 1980s, she began using reflective road signs, incorporating text in a gridlike manner reminiscent of crossword puzzles, a favourite pastime. Originally taking the signs as she found them, she began to become more involved in slicing them herself, producing intricate grids of words resembling parquetry. Armed with these segments of yellow signs, sheets of corrugated iron, linoleum and wood, she produced highly textural works, including many large-scale installations.

Gascoigne was born in 1917 in Auckland, New Zealand. She graduated from Auckland University in 1939 and moved to Canberra, ACT in 1943. Her artistic career spanned over 30 years, launched at the age of fifty by the support of the then National Gallery of Australia director, James Mollison. Gascoigne held her last solo exhibition at Roslyn Oxley9 Gallery, Sydney just months before her death in 1999.

In 1982 Gascoigne represented Australia at the 40th Venice Biennale with Peter Booth. Since that time she has been included in many important group exhibitions and solo survey exhibitions in Australia, New Zealand and Europe; such as, at the National Gallery of Victoria, Melbourne (2009); Wellington City Gallery, Wellington, New Zealand (2004); Drill Hall Gallery, Australian National University, Canberra (2000), and with the major survey Material as Landscape, Art Gallery of New South Wales, Sydney, 1997 touring to the National Gallery of Australia, Canberra (1998). Gascoigne's work is held in every state collection in Australia and many regional collections. Rosalie Gascoigne: A Catalogue Raisonné, was published by ANU Press in 2019, compiled by her son, Martin Gascoigne.