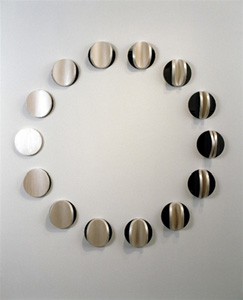 Courtesy of the artist

☆ Add to wishlist
“Hers is an art for all times and places, an art that concentrates on the universal qualities of nature, and the symbols with which we record our deeper understandings of the world. There are few Australian artists so versatile or so creatively ambitious; so capable of occupying an impossible middle ground between spirituality and science, between microcosm and macrocosm, the corporate foyer and the cathedral.” (John McDonald, “Marion Borgelt’s Universal Nature’, Australian Art Collector, 2011.)

With interests in cosmology, semiotics, psychology and phenomenology, Marion Borgelt’s art distils a broad range of influences in precise and highly considered forms. From paintings to large-scale installations, Borgelt’s career has spanned over four decades with works that seek to explore the underlying unities that drive science and spirituality.

Born in 1954 in Nhill, Victoria, Borgelt studied at the New York Studio School in the late 1970s before returning to Australia. From there, her style began to develop in a process of gradual evolution, integrating new media and new ideas into her works in a process of continual discovery. She has worked variously, in wool, stone, wax, stainless steel, organic matter, canvas and felt; and more recently, she has come to work with site-specific and large-scale public art projects.

Writing on the materiality that informs her work, Borgelt has said: “An idea will suggest the material or sometimes it’s the other way round, materials suggest ideas. Ideas and materials go hand-in-hand and that’s what gives an artwork integrity and a sense of being well-conceived. Honing ideas and materials simultaneously is part of the ‘plastic’ process of creating art.” (Quoted in Owen Craven, “Marion Borgelt”, Artist Profile, 2016.)