Provenance
Ray Hughes Gallery, Sydney
Acquired from the above by the present owner in 1994

"I hadn't quite worked out how I was going to put all the aspects I was encountering in one work. Living in the country everything moves - the seasons, the clouds, nothing is set. There are things behind you, all around you and you are in it. Everything is constantly moving... you begin to realise that you are in a landscape that is really the crust of the earth. It is air and ground. We're all just spinning through space. There is something about the paintings that is indefinite, not solid. We dont really have an orientation in this infinity." (William Robinson)

William Robinson is unquestionably one of Australia's most thoughtful and important landscape artists. Stepping into the landscape tradition so well defined by the preceding generation of painters Arthur Boyd, Fred Williams and John Olsen, Robinson takes into a fresh, topsy turvy understanding of the spiritual power and complexity of his environment.

'Landscape between Night and Day', comes from the Mountain series, which was exhibited at Ray Hughes Gallery in 1994. Overcoming a great personal tragedy Robinson was "on the edge of despair and sought solace in natures timeless presence and curative power." Curator Stephen Rainbird hails the series as "some of the most moving works produced by the artists as he drew strength from his agonizing circumstances and increased spiritual awareness". (Stephen Rainbird, 'William Robinson, Paintings and Lithographs 2000-2007', Australian Galleries, 2007, exh cat, p 9)

Provenance
Ray Hughes Gallery, Sydney
Acquired from the above by the present owner in 1994 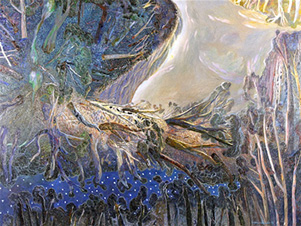 ☆ Add to wishlist
Still to come