"While Johnson evolved as an artist during the 1980s, and indeed incorporated imagery and symbolism from Aborigines and Tibetan Buddhists (among others), he never fell into the trap of appearing to kowtow to (let alone rip-off) such cultures. As an artist, as well as an individual, Johnson made a strange leap into being an active collaborator with realms that, to most Westerners, remain exotic and alien.

Again, unlike most contemporary practitioners, Johnson did not have the ego or arrogance to assume he could master traditional practices that had been handed down for generations. Instead, in a carefully planned but nonetheless humble approach, he opened his canvases to active collaboration. He has worked closely with Aboriginal artists in Papunya and Buddhist artists in Asia, including hands-on collaborations with Tibetan artists Karma Phuntsok.

The results are breathtaking amalgams of various cultures where the holy and the transcendental are almost everyday functions of social culture. Indeed, with its shimmering golds an ochres, rich deep reds and calming blues, Johnson's work, from a distance, resembles holy reliquaries, untouchable in their spiritual values. (A Crawford, 'Tim Johnson: Imitating Art', The Age, March 2005) 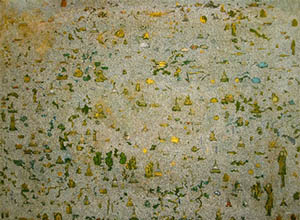