Provenance
Mori Gallery, Sydney
Acquired from the above

In a review of the 1993 exhibition at Mori Gallery, Felicity Fenner writes:
'The project continues the artist's interest in the machinations of history-making, drawing largely on found documentation and anecdote.... Researched in Rockhampton, Queensland, the characters in the portrait photographs Macdonald sources were all an inherent part of the goldmining boom that put Rockhampton on the map and fed the pockets of interstate industrialists.... 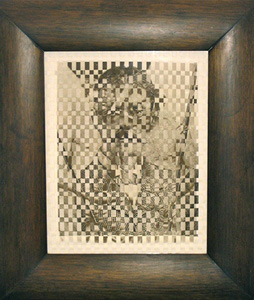 ☆ Add to wishlist
Fiona Macdonald is a Senior Lecturer in the Faculty of Art, Design & Architecture and director of the Graduate Theory Program at Monash University, Melbourne. Her work draws on local cultural traditions, social and natural history.