'Up in the Sky' series by Tracey Moffatt, is her most thought-provoking, sensitively photographed and largest body of work in her oeuvre so far. Extensively exhibited internationally since being produced in 1997, it was most recently seen exhibited in full as part of the new contemporary wing at the Art Gallery of New South Wales.

This image is drawn from the twenty-five soft focus photogravures that form Moffatt's 'Up in the Sky'. The series, with its tableaux imagery and narrative thread is seen as 'a tale of biblical complexity' (Gael Newton, 2000) in which contradiction unfolds in no certain order. Peopled by missionary types, wrestling men and affeared children, it assimilates, as ever, the myriad media and popular aesthetic references voraciously consumed by the artist, amidst a fostered upbringing in 1960s suburban Brisbane.

Any number of mercurial references have converged on the image, where a displaced cast are assembled in the vast Australian desert; in the first instance for Moffatt no sets have been constructed to furnish this series, yet as Stephen Berg comments, she still manages to make the Outback appear as a 'staged surrogate'.

With a cinematic handling, Moffat has produced an atmosphere of unease - distinct in its effect, but fragmentary as a memory-theatre, leaving ample room for all manner of individual manifestations and uncertain signs. The turning of these subjects in fixation beyond the picture plane opens an unmistakable channel. Their collective gaze produces feelings of intrusion so palpable; it is as though we had crossed the threshold of our viewing place and lain foot on theirs. 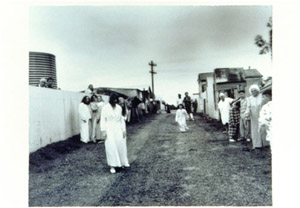 Courtesy of the artist and Roslyn Oxley9 Gallery, Sydney