This is a wonderful example of a seated nude from the revered Tony Tuckson, remembered as one of Australia’s finest abstract expressionists. A bold work of simplified form and restricted colour, it reveals the artist’s preference for pink and blue usually associated with the period 1950-60. Works from this time were drawn from the world that surrounded Tuckson – his family, friends, still lifes of the dining room and kitchen, nudes and studio interiors. They hint at the inspiration and ideas ‘that were obviously coming thick and fast,’ and also at the artist’s affinity with School of Paris Modernism.
(John McPhee, ACA, April 2001)

Tim Fisher, former curator NGA, writes, ‘as an abstract painter with roots in Picasso and Matisse, Tuckson was interested in the qualities of radiance, energy, presence and inner resonance.’ Tuckson was the first to pursue Indigenous works of art as objects of beauty and infinite spiritual provenance for the Art Gallery of New South Wales, and Fisher acknowledges that ‘the vital forces that inform Tuckson’s art were found in China, Melanesia and Aboriginal Australia… though not through literal or formal quotation. Tuckson’s interest lay in “the underlying spirit of their imagery”, and how he could interpret or reinvent this subjective and symbolic state through his own body and gestures.’
Tim Fisher, ‘Tony Tuckson, Painting Forever’, National Gallery of Australia 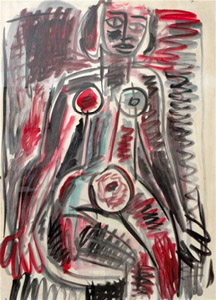 ☆ Add to wishlist
Tony Tuckson is one of the great figures of the Australian art world, having painted in relative secrecy whilst on the Art Gallery of New South Wales executive from 1950 to 1973, only to have two solo exhibitions during his lifetime - in 1970 and 1973 - after strong encouragement from his peers. During his time at the Art Gallery of New South Wales he was notably one of the first, though unofficial, collectors of Indigenous art, making his first trips to Melville Island and Arnhem Land in 1958 and 1959.

His materials were not precious; he usually worked with acrylic, paper and composition board, which suited the urgency and directness of his expression. He worked in an abstract expressionist style that went through a series of different stages; prominent examples of this are generally seen as his nudes, interiors and still lifes of the 1950s; his red, black and white paintings and collages of the early 1960s; and his later abstractions of the 1970s that feature spare grounds of colour with lines uncompromisingly painted and incised.

Born in Egypt in 1921 and having grown up in the UK, Tuckson came to Australia in 1942 as an RAF serviceman. When he was discharged from service in 1946 he, like so many of his generation, studied at the East Sydney Technical College under the Commonwealth Reconstruction Training Scheme. Tuckson's major exhibitions are the 1976 memorial exhibition 'Tony Tuckson 1921-1973', Art Gallery of New South Wales, Sydney and the retrospective 'Painting Forever: Tony Tuckson' presented by the National Gallery of Australia, Canberra in 2000. Tuckson dealt solely with Watters Gallery, Sydney during his lifetime.