Migration and the adaption to a new environment are concerns of a growing number of Australians, as our population escalates. In her series 'groundspeed', Sydney-based artist Rosemary Laing, symbolically captures the process of colonisation and the domestication of our native environment.

In a panoramic photograph, stage-directed rather than manipulated through digital methods, Laing has laid down a 1970s Bold Axminster Red Piazza carpet into a location at George Boyd Lookout in southern New South Wales. Returning after a period of time, Laing photographed natures encroachment on this incongruous carpet, not only as a symbol of British invasion but of the domestication of this land.

"In areas of dense vegetation on the New South Wales south coast and on a rocky shore with the ocean crashing in the background, Laing laid and photographed ornately patterned carpets. The carpets follow the contours of the site, seamlessly edging trees, rocks and undergrowth to appear at one with the natural environment, foliage and woven patterns meshing decoratively across the photographic surface. Yet of course, their occupation is temporary - a staged, fundamentally rhetorical act for the purpose of creating the photographs. The dated, decorative carpets act as emblems of colonial occupation, of the domestication of the natural environment in a attempt to remake 'home' here. " (Blair French, 'Rosemary Laing', "Twelve Australian Photo Artists", Sydney, 2009, p. 93) 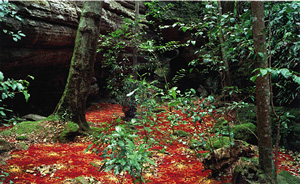 Courtesy of Tolarno Galleries, Melbourne and the artist

☆ Add to wishlist
Rosemary Laing is a photo-based artist with a painter’s eye. Her highly detailed, intentional compositions meditate upon humankind’s complicated relationship to the natural environment. The resulting images combine a sublime appreciation of the distinct Australian landscape with highly choreographed human interventions that she integrates within nature in what amounts, in essence, to a transient form of land art.

Born in 1959 in Brisbane, Laing has been working and exhibiting since the 1980s. She trained as a painter in the late-1970s before turning to photography, which was at first just a form of reference material. Laing rose to prominence with her flight research (1999) and Bulletproof glass (2002) series of floating brides, images that defy reason in their composition and surreal quality, especially since they were shot without the assistance of digital composition.

In 2017-18, Laing was the subject of a major survey of her work from the last three decades at the TarraWarra Museum of Art, Healesville, Victoria. In 2015, two of her photographic series – greenwork (1995) and brownwork (1996-97) – were shown in full in Rosemary Laing: transportation, Art Gallery of New South Wales, Sydney. An earlier major survey, The Unquiet Landscapes of Rosemary Laing, was held at the Museum of Contemporary Art, Sydney, in 2005, touring in 2006 to Kunsthallen Brandts Klaedefabrik, Odense, Denmark. She has participated in multiple biennials, including the Biennale of Sydney (2008); the Venice Biennale (2007); the Busan Biennale (2004); and the Istanbul Biennale (1995).

In 2019, Laing received the Overseas Photographer Award at the 35th Higashikawa Awards, Hokkaido, Japan, in career recognition of photographic achievements such as weather (2006); leak (2010) and Buddens (2017). A monograph on Laing’s work was published by Prestel, New York, in 2012, written by Abigail Solomon-Godeau.