"In 1986 Tomescu was invited to work at the Victorian Print Workshop, Melbourne, founded by master printer John Loane, for three weeks. Loane was an early supporter of Tomescu’s and encouraged her to try printmaking. During the 1990s, Tomescu worked closely with Loane to produce several series of etching and aquatints, culminating in the Seria Neagra series of 1998-99. The four works of this series are amongst Tomescu’s largest and most dramatic prints. Her gestural mark-making conveys movement and compressed energy while the deep blackness of the ink creates a stark contrast with the paper support. The material and philosophical suggestions of transition embodied within these works is extended in their title, Seria neagra which translated from Romanian, reads as ‘Black series’. (http://exhibitions.library.unsw.edu.au/the-view-from-here/aida-tomescu) 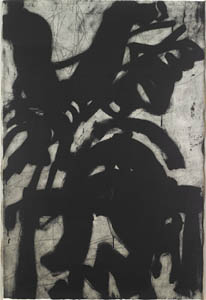 ☆ Add to wishlist
Born in Bucharest, Romania in 1955, Tomescu came to Sydney in 1980, where she began to exhibit with Gallery A and Coventry Gallery and, where she continues to live and work. Tomescu trained at the Institute of Fine Arts, Bucharest to 1977 and the City Art Institute, Sydney to 1983.

Tomescu was awarded the Dobell Prize for drawing in 2003, the Wynne Prize for landscape painting in 2001 and the Sulman Prize for genre or subject painting in 1996 by the Art Gallery of NSW, Sydney. In 1996 Tomescu was also awarded the inaugural Lowenstein Sharp fellowship at Heide Museum of Modern Art, Melbourne, which was followed by a solo exhibition of the artist's work at the institution in 1997. In 2009 the Drill Hall Gallery, Australian National University, Canberra presented the solo exhibition 'Paintings and Drawings'.