Michael Johnson’s Frontal works (1968-69) were conceived in London and executed on the artist’s return to Sydney, where he painted out of a studio in Princes Street, Blues Point. Assembled together with three-dimensional canvases, these works expanded Johnson’s exploration of the colour field by adding depth, form and the play of light and shadow. Johnson recalls from his childhood prints of Vermeer paintings that his mother hung at home that he was struck by the play of interior and exterior, and the way in which light enters a room through a window. While in the United Kingdom, Johnson also visited Stonehenge, where his observation of the verticals and horizontals of post and lintel found a lifelong resonance.

In Frontal (1968), Johnson placed dark magenta parallel canvases atop an orange base, framed by two columns of brown that reflect the architecture of a henge. Several Frontal works have entered major public collections, with Frontal 2 in the Art Gallery of New South Wales collection, Sydney, and Frontal red (1968) in the National Gallery of Australia collection, Canberra. 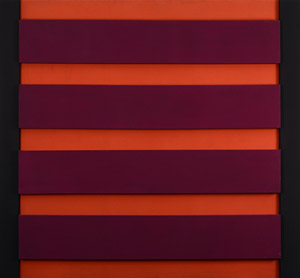