Michael Johnson’s Frontal works (1968-69) were conceived in London and executed on the artist’s return to Sydney, where he painted out of a studio in Princes Street, Blues Point. Assembled as three-dimensional canvases, these works expanded Johnson’s exploration of the colour field by adding depth, form and the play of light and shadow. Study for Frontals, 1966, is a rare work on paper that shows Johnson’s process of thought for his canvases. 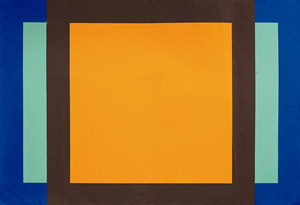