Exhibited
Another from this edition was exhibited in 'Destiny Deacon- Colour Blinded', Roslyn Oxley9 Gallery, Sydney, 28 April -21 May 2005 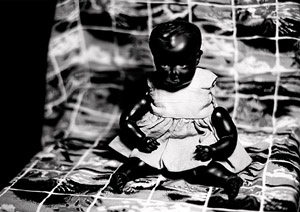 Image courtesy of Roslyn Oxley9 Gallery, Sydney and the artist

☆ Add to wishlist
Destiny Deacon is a KuKu (Far North Queensland) and Erub/Mer (Torres Strait) artist. Born in Maryborough, Queensland in 1957, Deacon is a photo artist, video maker, performer, writer and broadcaster who stimulates ideas about Aboriginal and Torres Strait Islander politics. Her work references racial stereotypes in art and popular culture, as well as suburban and childhood objects and imagery to bring to light the demeaning, bizarre and racist depictions of Indigenous Australians in film and televsion, black children's dolls and in kitsch decorative objects. Deacon once said of her images that "I like to think there is a laugh and a tear in each picture", a sentiment that captures perfectly the competing senses of innocence and tragedy that underlie her artworks and ideas.

After working alongside Aboriginal activist Charles Perkins as one of his "Angels", Deacon began working as a photographer with her first solo exhibition, Caste Offs, Australian Centre for Photography, Sydney (1993). Since then, she established her place as a major Australian artist domestically and further afield, showing at the prestigious Documenta 11, Hatje Cantz, Germany and major festivals and biennales in Yokohama, Japan (2002); Johannesburg, South Africa (1995) and Havana, Cuba (1994). As much a cultural figure as an artist, she is credited with introducing the term "Blak" to describe Indigenous Australian art and culture.

In 2020, Deacon received the largest exhibition of her work to date, DESTINY, National Gallery of Victoria, Melbourne, which looked back on three decades of photography, installations and other works. Her 2004 major survey, Walk & don't look blak, Museum of Contemporary Art, Sydney, toured to the Metropolitan Museum of Photography in Tokyo, the Tjibao Cultural Centre, Noumea, New Caledonia and Wellington City Gallery, New Zealand.