When Michael Johnson returned to Sydney from New York in 1976, he found a studio in Taylor Square, Darlinghurst, where he stayed until 1984. From that studio he produced his Taylor Square series as a response to his new location.

As Sydney Morning Herald critic Nancy Borlase observed, the title of the series is both the geographical location of the works, but also a reference to their distinctive forms – the square of colour and the bold diagonal that cuts across and anchors the composition. 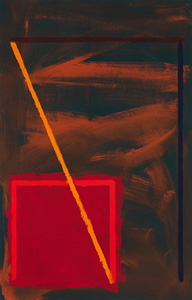