Tiwi, Wigram and Elcho Island Art from the Laverty Collection

Annette Larkin Fine Art is delighted to present Tiwi, Wigram and Elcho Island Art from the Laverty Collection, an exhibition of paintings and wood sculptures made by contemporary Indigenous Australian artists from the Northern Territory. All the works on display come from the eclectic and spirited contemporary art collection of Elizabeth Laverty and her late husband, the eminent pathologist Dr Colin Laverty (1937-2013).

Colin and Elizabeth Laverty’s collection of Indigenous Australian art began in the late 1980s after they were left awestruck by an exhibition of Papunya Tula artists from Kintore, Northern Territory, that they saw at the bicentennial World Expo 88, Brisbane in 1988. In the decades that followed, the Laverty's educated themselves on Indigenous art, taking note of the immense diversity across clans, language groups and artistic traditions across Australia. They made numerous visits to local communities, galleries, art collectives and the artists themselves, many of whom they came to count as friends. All works were purchased from community art centres that support the local art industry.

The Laverty's particularly stressed in their collecting the vital, contemporary quality of Indigenous art. In the preface to the first edition of Beyond Sacred, a book that catalogues their immense collection, they wrote: “Aboriginal art is not just bark painting or central desert dot and circle painting, as many people, especially outside of Australia, have thought. It is as diverse as western art…The best of recent Aboriginal art is fantastic contemporary art, coming out of the world’s longest continuously evolving art tradition.”

The art critic John McDonald described Colin Laverty’s vision for the collection as being firmly grounded in respect for the artists: “In typical fashion Col researched the subject exhaustively and sought to build an understanding of contemporary Aboriginal art and life. He came to the conclusion that indigenous art should not be treated as a separate category within Australian art, but as a natural part of the contemporary scene. This was necessary to break down barriers of prejudice and to ensure that the artists got a fair deal for their work. He also devoted much thought to the perennial problems of an industry riven by competition, cronyism and forms of petty profiteering.”

This exhibition showcases contemporary works, mostly from the 1990s and 2000s from three island communities in the Northern Territory: the Tiwi Islands, Elcho Island and Wigram Island. The Laverty's acquired the works from a number of visits to community art centres in the Northern Territory from 1996-2002. There are fifteen paintings on canvas and paper from the Tiwi Islands and Elcho Island that showcase a broad spectrum of traditional contemporary artists from those communities. And there are six painted wooden carvings: five by the Wigram Island artist Terry Dhurritjini Yumbulul; and one earlier 1970s figurative carving from the Tiwi Islands.

The Tiwi Islands are located 80km north of Darwin at the meeting point between the Arafura and Timor Seas. Tiwi art traditionally began as part of pukumani and kurlama ceremonies, funerary and fertility rites respectively. The works on paper by Tiwi artists like Jacinto Lorenzo, Pedro Wonaeamirri, Aileen Henry, Johnny Wilson, Maryanne Munatopi and Katrina Kerinauia are all held together by a clear but by no means rigid sense of geometry and symmetry. Working in the same tradition as the eminent Tiwi artist Kitty Kantilla Kutuwulumi Purawarrumpatu (c. 1928-2003), the mark making is intricate and assured, a delicate, layered web of lines and array of dots. There is also one figurative carving from the 1970s, a relatively recent practice in the long history of Tiwi art. Historically, Tiwi carvers only made spears, clubs and Tutuni burial posts, however since its first appearance in the 1960s, figurative carving has since become an important subject within Tiwi artistic culture.

Elcho Island or Galiwin’ku is one of the Wessel Islands, a chain that sits off the northeast coast of Arnhem Land. The home of important musicians like Geoffrey Gurrumul Yunupingu (1971-2017) and George Rrurrambu Burarrwanga (1957-2007), Elcho Island’s visual culture is equally unique, predicated on bold designs inspired by natural materials. While the Tiwi paintings owe their power to intricate pattern and mark making, the Elcho paintings of Mickey Durrng Garrawurra and the Burarrwanga family often draw the eye to larger fields of colour and bold compositional elements. The paintings read like woven tapestries with hatched lines of overlapping colour, connecting them to other Elcho artistic traditions like weaving, fibre art and textiles.

Four works by carver and painter Terry Dhurritjini Yumbulul (b. 1950) are also on display. Yumbulul was born on Wigram Island, one of the English Company Islands off the northeast coast of Arnhem Land, south of the Wessel Islands. He is a member of the Warramiri clan and the Djangu language group. His sculptures are sacred, storytelling objects, part of a tradition passed down from his father and grandfather: “Art is a way of preserving my culture and the pictures I paint are from stories I heard as a child.” The wood for Yumbulul’s sculptures often comes from local trees, and he makes use of natural ochres collected from Warramiri land – red from the Wessel Islands and yellow specifically from Elcho Island – as well as from other locations across the Northern Territory – black from Groote Eylandt in the Gulf of Carpentaria and white from near Mica Beach, Darwin. His sculptures often depict ancestral stories, especially about the creatures and spirits that inhabit the ocean.

Reconciliation is a predominant theme of the stories Yumbulul – and, indeed, much of contemporary Indigenous art more broadly – wishes to tell. Yumbulul’s family tell a story of when Matthew Flinders arrived in Arnhem Land in 1803. Flinders’ ship had run out of water during the voyage. When the Europeans disembarked, Yumbulul’s ancestors offered to find water for the sailors. “That story”, says Yumbulul, “is a symbol of peace, of the uniting of black and white. They could work together then: we can do it now.”

Tiwi, Wigram and Elcho Island Art from the Laverty Collection will run until 1 June 2019. 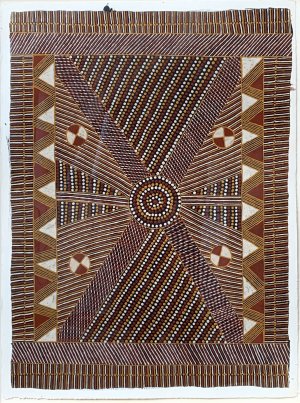 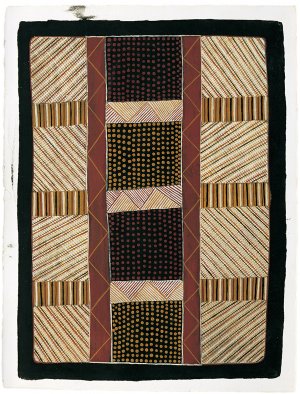 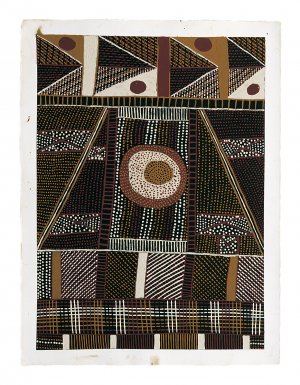 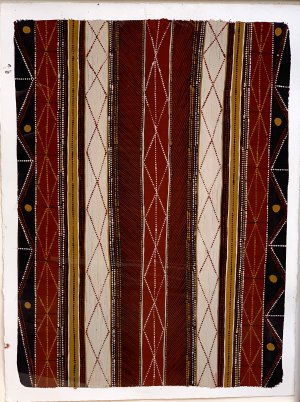 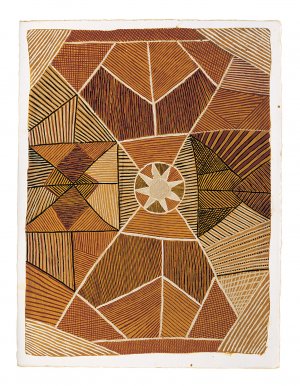 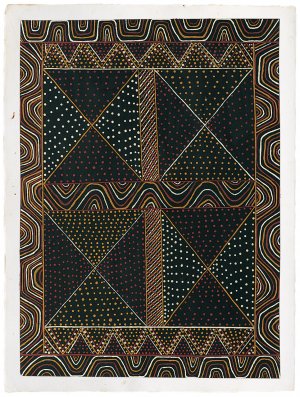 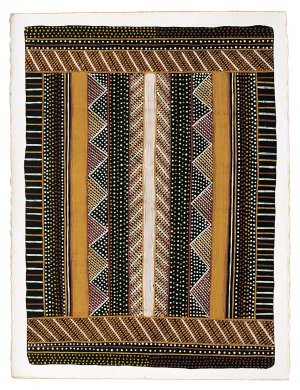 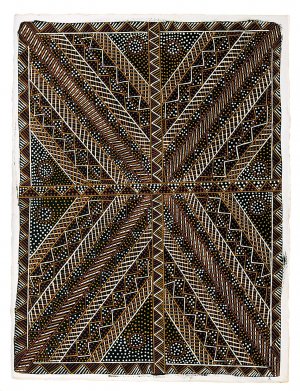 Bitjikmi – The Spirit of Mardi, the Crayfish 2004 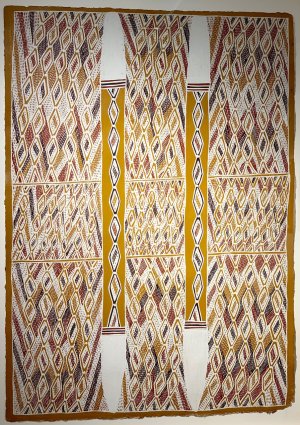 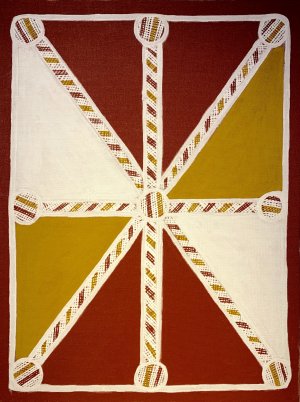 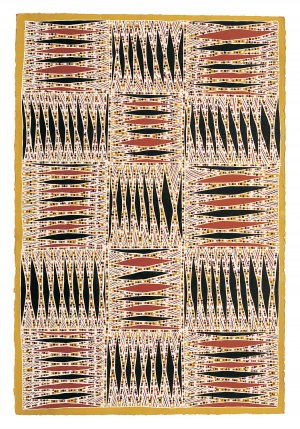 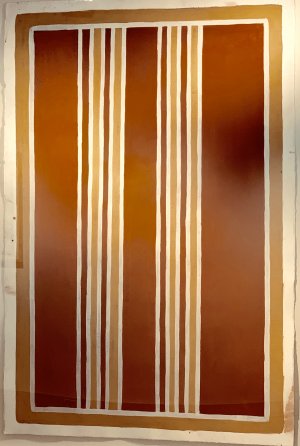 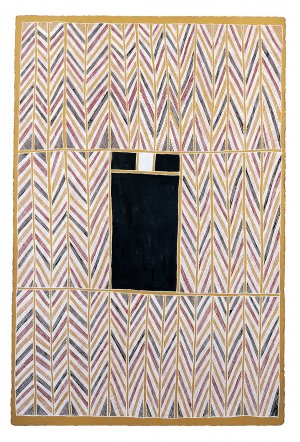 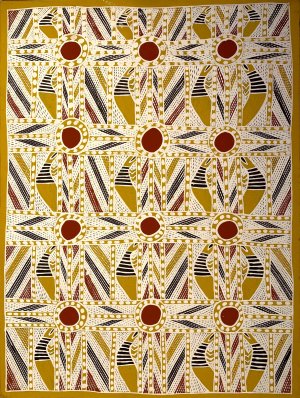 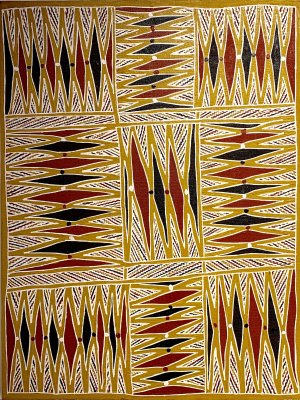